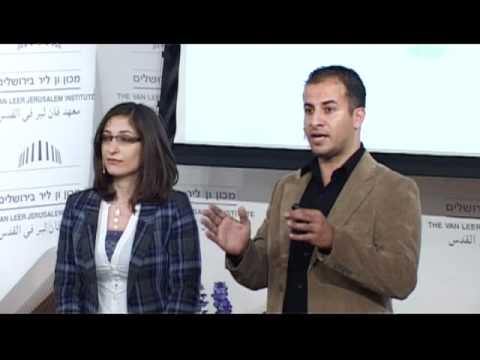 All human beings own a common treasure which is the source for life -- the sun. Sometimes it is too hot but always it is the source for agriculture and food, fun and pleasure and the best potential supplier of alternative energy.
And guess what - it is free! At least for the time being...
The Forum for Environment and Regional Sustainability at The Van Leer Jerusalem Institute, headed by Dr. Sarah Ozacky-Lazar, believes that the environment is a vehicle to promote cooperation and peace between neighbors and aims at creating bonds between all residents in the Middle East through their common cross-border environmental interests.
In the conference "Harvesting the Sun Twice -- Cross Border Initiatives for Environmental Peacebuilding" some of the Forum's 2011 projects were presented to the broad public.

Sawsan Issa and Osama Suliman studied at the Arava Institute for Environmental Studies at Kibbuz Ketura in Israel. After graduation they established their own NGO in Amman promoting environmental awareness in their country Jordan. Sawsan is a special consultant to a new environmental project in the Petra region and Osama works for the Jordanian electricity company on environmental protection. They were responsible for carrying out the renewable energy experiments in Jordan, on a farm south of Amman.
To Van Leer Institute site: http://www.vanleer.org.il/eng