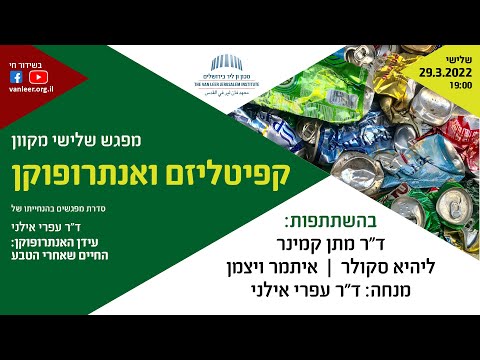 The Anthropocene Epoch: Life after Nature | Third meeting (in Hebrew)

A Series of Conversations Led by Dr. Ofri Ilany

The planet on which we live is out of control. Influenced by hundreds of billions of tons of carbon emitted to the atmosphere during the industrial epoch, our Earth is in a state it has not been in for millions of years. Climate change and its ramifications are no longer a forecast by experts—it is a reality that is manifested more and more frequently in extreme climatic and ecological phenomena: heat waves, fires, floods, drought, and the melting of glaciers. This crisis threatens the very existence of many of the creatures living on this planet, including humans. Since the dawn of history humankind has contended with various crises, but never have humans been required to overcome such a challenge, unlike any in their history.

The Anthropocene - originally a geological term - has become one of the most influential concepts in critical and theoretical thought in recent years. The concept, which means “the human era,” refers to human beings’ having become a force of nature, the dominant force on the planet. The concept Anthropocene has social, political, and philosophical meanings. Nature, in its familiar form as a force on which humans are dependent, has, for all practical purposes, ceased to exist, and at the same time, the planet has burst into human history.

This series of conversations will deal with aspects of the Anthropocene and the environmental crisis that are not generally discussed. Among the topics we will address will be the philosophical aspects of the fear of the end; various religions’ relation to the planet; the connection between the climate crisis and capitalism; and life in the era of the extinction of species and ecological change.